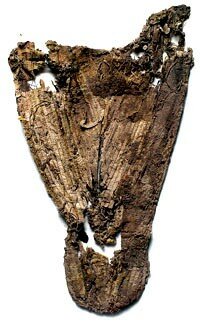 The term “Deliberately Concealed Garments” describes  items of clothing that have been deliberately hidden or buried within the structure of a building. The evidence for this practice dates back to the Middle Ages. Builders, owners or residents appear to have hidden clothing and other objects in the fabric of buildings, sometimes intentionally sealing the space afterwards.

The DCGP website provides a virtual collection of once concealed objects and includes some objects that have since been re-hidden and others which have been lost.

Search and explore the database of concealed garment finds.

Read more about what is a deliberately concealed garment?

BBC News: Why Australian settlers hid shoes
Items of clothing found concealed in Australian buildings tell the story of a battle waged by early settlers with the evil spirits they feared were lying in wait. 16 March article.

Above: A view of the front of a mid-18th century silk, linen and whalebone stomacher from the Nether Wallop cache found in 1978 by the Maynards while renovating their home. The stomacher was found with dress patterns and a waistcoat bundled up in the knot-hole of an oak bracket. CG8.a