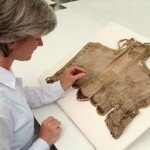 The Sittingbourne Cache is the collective name given to a large group of artefacts found within the fabric of an old public house in Sittingbourne, Kent, in the south-east of the UK, shortly before the building’s demolition. The cache, consisting of over 500 artefacts, is the largest reported to the DCGP. The finds were uncovered by a group of amateur historians (who were documenting the building) in three main locations in the building: in the voids on either side of a stepped, brick chimney flue; under floorboards in a first floor room at the front of the building; and, under floorboards in another part of the building. Most of the finds were found alongside the chimney flue; examples include shoes, a felt hat, fabric scraps, scraps of leather harness, rope, the remains of clay pipes and lots of paper scraps. The under floorboard finds include two garments found in the same location: a pair of stays (corset), dated circa 1620/1630 and what may be the lining from a pair of breeches of similar date. The stays may be the second oldest pair in the UK.

For more information about the Sittingbourne Cache see:

EASTOP, D. 2006. Outside in: making sense of the deliberate concealment of garments within buildings. Textile, The Journal of Cloth and Culture. 4 (3), 238-255. pdf

This entry was posted in The caches. Bookmark the permalink.

One Response to Sittingbourne Cache