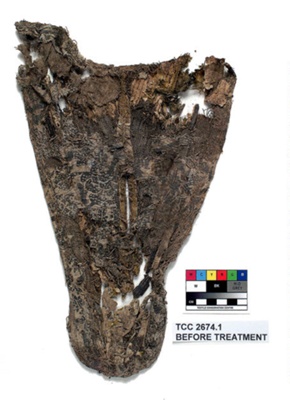 About this objectThe stomacher is formed of five main layers, that have been hand stitched together, an outer layer of yellow rep-weave silk, which is backed with paper. Supporting this there is a layer of whalebone strips, at the widest point twenty-four lines running diagonally down the stomacher. The last two layers form the lining; first there is a layer of natural course weave linen that has been stitched down between each whalebone strip, covering this there is layer of natural colour plain weave linen, block printed in black with a flower pattern. There is also a strip of natural colour linen running down the right-hand side, of the front of the stomacher, which is likely to have been added when it was altered. This is a cream and orange twill-weave fabric, woven to form a pattern of small concentric diamonds. The poor condition of the stomacher has exposed the different layers from which it is composed, making it possible to study the materials and techniques used in its construction.

The stomacher has a shallow curved top edge and a spoon shaped base. It is not entirely symmetrical; it appears to have been re-shaped down the right front side. There are also the remains of an additional strip of whalebone down the centre of the stomacher at the back, this is sewn in crudely with thick linen thread. The same linen thread has been used to add a series of random large, stitches across the garment, the purpose of these stitches is not currently known.

The stomacher is in a very poor and fragile condition. Its condition can be attributed to wear and alterations made before it was concealed and degradation that occurred while it was concealed. There are large areas of fabric loss and a large vertical slit down the centre, where the central seam has opened up. The fibres are very abraded and frayed; the yellow rep-weave silk that would have covered the front is barely visible as the fibres have been abraded to such an extent. The whalebone is in a fair condition, rigidity has prevented extensive creasing to the stomacher. Particulate and ingrained soiling cover much of the fabric, the origins of the staining have not been identified at this time.

There is evidence to suggest that the stomacher was altered and repaired prior to concealment, the repairs have been undertaken using a thick natural coloured linen thread, the stitches are large and form a random pattern. The stomacher has been reshaped during alterations and a further layer of fabric possibly added. The degraded state of the stomacher makes it difficult to determine the exact purpose and nature of all of the alterations.

A proposal for the conservation of the stomacher and plans for its future method of storage are currently being prepared by Gabriella Barbieri, under the supervision of Senior Lecturer and Conservator Dinah Eastop, at The Textile Conservation Centre.

-----
The Nether Wallop Cache was found in 1978. The discovery was made as the owners of a property in Nether Wallop, Hampshire, were gutting and renovating their home. The house has a 15th century cruck timber frame and was originally a farm dwelling. The cache was found in a first floor bedroom, above the living room. The items were found together, bundled into a knot-hole, formed in one of the oak brackets which is joined to into the main cruck frame and supports the cross-beam spanning the two arched frame members. The bracket is located in a North-West facing wall, directly above the inglenook fireplace.

The farmhouse was altered in the 17th and 18th centuries, the cache may have been concealed while alterations were being made. In the 17th century a upper storey was built into the original cruck frame to give two first floor bedrooms and an extra ground floor room was built on to the south-eastern end of the house, this is now the dining room. In the 18th century another ground floor room was built on the north-western end, with a corresponding upper room.

Following the discovery of the cache, the owners of the property wrapped the items in plastic and kept them in the old bread oven, in the ingle-nook fireplace. The cache stayed in this location for over twenty years, until they were taken to be identified at Winchester Museum. The Museum in turn passed them on to The Textile Conservation Centre, where the stomacher has become the subject of a student dissertation.