What is a cache?

The term cache loosely means a place where objects are hidden; it can also refer to the group of hidden objects themselves. In terms of concealed garments we use the word to denote a group of objects that were or are concealed in the fabric of a building. Usually a particular cache will be named after the location where it was found e.g. the Ripley Cache or the Abingdon Cache.

We have used this term to distinguish one group of concealed objects from another. It also enables individual objects to be cross-referenced with the other objects found in the same cache.

In cases where only single objects have been found or single objects are referred to, we will describe them by the location and the type of object found, e.g. the Cupar Hat.

Tim Easton, Researcher, has described caches of concealed objects as “spiritual middens.” His definition of, and explanation of, spiritual middens can be found in the Encyclopaedia of Vernacular Architecture of the World. Vol. 1., page 568.

The word midden literally means ‘rubbish heap’ or ‘dung heap’ and also pertains to a receptacle for domestic rubbish. 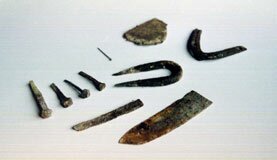 Part of the Lawshall cache found in 2000 comprising nails, knives, blades, the corner of a book cover, a dressmaking pin and a shoe blackie found in the walls of an early 16th century house in Lawshall, Suffolk. Privately owned. CG.13