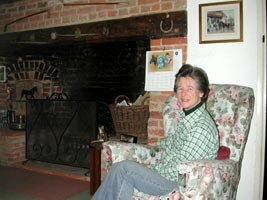 Whilst gutting and rebuilding their house 22 years ago, the Maynards found a group of objects concealed in and behind one of the bedroom walls. These comprised a velvet waistcoat, a stomacher and some paper patterns and also a cat skeleton. What follows is a summary of an interview conducted on 4 March 2002, with Mrs Maynard, who discovered the cache, she requested Winchester Museum carry out an identification.

How did you find the cache?

“When we bought the house it was completely dilapidated and hadn’t been lived in for three years. We knew when we came into the middle of the house that there must have been a fireplace because of the chimney up above, but to all intents and purposes there was no fireplace visible, there were just hardboard walls, so we had to literally pull the house to pieces before we could see how it had actually been constructed.

During this process, we uncovered the original cruck frame, and in my daughter’s bedroom in one of the cross members there was a knothole stuffed with what appeared to be rubbish. We had to climb right around the other side of the wall – into the cavity around the chimney breast – and were then able to pull out a bundle. On closer examination we discovered that it was a velvet waistcoat and a stomacher with paper patterns wrapped around them. It was all very old and battered and falling to pieces.”

What was your first response to discovering the objects?

“I was terribly excited about finding something like this. We did not realise that people did that [conceal garments] and our first response was in thinking that it was perhaps some old clothes to fill up the hole.

We also discovered some cat bones in the same area and we later read in Period Home magazine [1985 vol. 6 no. 5] that there are such things as hidden caches of items, and we began to wonder if these items had been put there for a particular reason other than to fill up the hole in the beam, so that the wind and cold could not get into the little bedroom.

The thought of actually having clothes which are that old, picturing the people who lived there and the fact that they had been worn is inspiring.”

When you first found the cache, before you did any research, you assumed they were used to prevent the draught?

“It was a bit strange because the paper, some plain and some newspaper, is cut in the shape of patterns to make garments. The reason why they should have used that was even more of a mystery. It wasn’t neatly wrapped but just stuffed into the hole.”

Did you try to unfold the objects?

“Very carefully, because they were obviously very old and tatty. We wrapped them in plastic and then kept them in the old bread oven of the inglenook fireplace because we didn’t quite know what to do with them. They remained there for a long time until I took them to Winchester Museum.”

Why did you decide to take them to the museum?

“I was doing jury service in Winchester at the time, and during the lunch break I wandered around Winchester and found the museum and remembered the objects and wondered if the museum would be interested in either having the objects or of knowing about them. I was also interested to know if I could find out more about them and how best to preserve them. The museum staff were quite excited when I handed them over and were interested in The Textile Conservation Centre doing some detailed work on them.”

You have mentioned hidden caches and that some people believe they should be replaced – what are your thoughts on this?

“We did read in the Period Homes magazine that some people are worried about moving the objects or cat bones they find, because they were put there to keep bad vibes away. We have never had any problems with this. It would, however, be nice to have a record of the finds to be kept with this house, but the actual items do not need to remain here. If someone can make use of them then that is far more sensible and it would be an awful waste to leave them here.”

Have these finds helped you to imagine the past occupants of this house?

“Oh yes, this house has so many mysteries. For example, one of the beams in the sitting room has shot gun pellets in it – you can’t help but imagine all sorts of stories on how they became imbedded in there. Having garments of people who actually lived here makes you wish even more that you could find out exactly what these people must have been like and how they lived their lives.”

During your research you also read about people concealing objects to protect their houses – how do you feel about this?

“I am not superstitious so do not subscribe to that point of view, but I do know that houses can have different feelings about them. One house in this village is meant to be haunted and I do feel uncomfortable in it. This house, however, has never had any bad vibes at all. It did cross my mind – some people do believe that when you move such objects from the house something terrible might happen – but so far nothing has happened and I haven’t had any ghost complaining!”

View the items found in the Nether Wallop cache.

This entry was posted in Oral history. Bookmark the permalink.